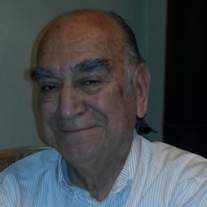 Roland D. Soto Sr., 81, passed away after a short illness on Tuesday, March 22, 2016 in Albuquerque, NM. He was born May 12, 1934 to Paul and Mable Soto in Albuquerque, NM. In October of 1965 he married Rosie Chavez at Immaculate Conception Church. Roland was a 36-year member of the New Mexico Air National Guard. Roland was a life long photographer and volunteer and helper to many organizations throughout his life. He was a long time Boy Scout Master at St. Anthony’s Orphanage, an usher at Immaculate Conception Church, a long time member of Woodmen of the World Lodge 1 and was a member of the American Legion.
Survivors include his daughter Rosemary Dominguez and husband, Paul; two sons, Roland Soto Jr. and his wife, Rosie, and Ronald John Soto; six grandchildren, Alfred Michael and fiancé, Deana Tenorio,  Chantelle, Miranda, Joshua, Victoria and Diego and one great-grandchild Brooklyn Chavez; one sister, Louise Padilla and husband, Robert; three brothers, Ricarte Soto and wife Susie, Paul Soto and wife, Dolores and Oliver Soto and wife, Bea as well as many nieces, nephews, other relatives and friends. Brother/Sister in laws David Chavez, Bernadine Chavez, Priscilla Torres and long time family friend David Ferro and wife, Laura.
He was preceded in death by his wife Rosie; his parents Paul and Mable Soto; one brother, Ricarte Soto and members of his loving wife’s family, The Juan and Julia Chavez family.
Roland’s way of life was to always tell a joke and bring a smile to the face of everyone he met. Although we will miss you, you will never be forgotten.
A Rosary will be recited at 9:30 a.m. on Tuesday, March 29, 2016 at Immaculate Conception Catholic Church, 619 Copper Ave NW. with a Mass to be celebrated at 10:00 am and will then be laid to rest at Mt. Calvary Cemetery. Pallbearers will be, Roland Steve Chavez, Chris Chavez, John Chavez, Dominic Padilla, Anthony Padilla and Alfred Michael Soto. Honorary Pallbearers, Gary Chavez, Mathew Chavez, KenMark Chavez, David Ferro, Steve Soto and Gregory Torres.
To view information or leave a condolence please visit www.danielsfuneral.com
Garcia Mortuary
717 Stover Ave. SW
Albuquerque, NM 87102
505-243-5222

To order memorial trees or send flowers to the family in memory of Roland Soto, please visit our flower store.