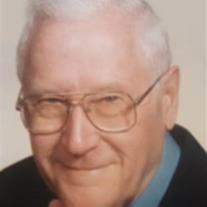 Tilden, Robert
Age 90, beloved husband, father, and grandfather, was embraced by the Lord Thursday, October 28, 2014.   He was born in Nashua, NH and was a resident of Albuquerque since 1962, where he was a member of St. Ann's Catholic Church.  Robert was a proud Veteran of the United States Army and Air Force, who served his country during World War II in Battle of the Bulge which was a major German offensive campaign.  Robert is survived by his loving wife of 26 years, Louise Marquez Tilden; step-daughter, Loretta Nesting-Glass and husband Robert of Yuba City, CA; grandsons, SSgt. Wes Nesting and CPL Matt Nesting both of Yuba City, CA; sister-in-laws, Martha Gonzales of Denver, CO, Lugarda Serrano of Albuquerque, NM, and Theresa Armijo of Phoenix, AZ; and his good friend, Dennis Duran.  Robert will be greatly missed by his family and by those whose hearts he touched. Mass of Christian Burial will be celebrated Saturday, November 1, 2014 at 11:00 a.m. at St. Anne Catholic Church, 1400 Arenal Rd., SW.  Interment will take place on Wednesday, November 5, 2014 at 11:15 a.m. at the Santa Fe National Cemetery.  To view information or leave a condolence please visit www.danielsfuneral.com
GARCIA MORTUARY
717 Stover Ave. SW
Albuquerque, NM 87102
(505) 243-5222
To order memorial trees or send flowers to the family in memory of Robert Tilden, please visit our flower store.