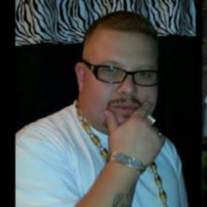 Benavidez, Michael M. (Werro Mike)
Age 29, passed away Thursday, March 17, 2016. Michael was a gun admirer, was interested in Astronomy, Physics and Minerals. He loved everyone with all his heart. His boys and his wife were his world. He was a real estate investor and the vice president for the Los Padillas neighborhood association.

He was preceded in death by his son, Tomas Rey Benavidez; grandmother, Kathleen L. Benavidez and uncle David Rey Benavidez.

A Rosary will be recited on Tuesday, March 22, 2016 at 10:30 a.m. at Holy Family Catholic Church,  562 Atrisco Dr. SW, with a Mass to follow at 11:00 a.m.  Interment will be at San Lorenzo Cemetery, Polvadera, NM. He will be greatly missed we love you and this is not forever, our lives will never be the same.