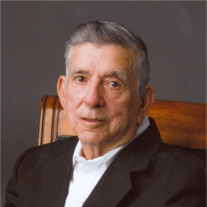 Landavazo, Maurice "Morey"
Maurice "Morey" Manuel Landavazo Sr. died on July 4th surrounded by all his children, grand, great grand and great great grandchildren. He was born November 7, 1928 in San Rafael, NM. He was raised in Gallup, NM where he married his wife of 67 years Paula Baldonado in 1948. He was a printer for 25 years for the Albuquerque Tribune, he also worked for APS and eventually retired from Sandia National Labs, he often held a second job. He was a devout Catholic and attended daily mass for many years and he was an active member of the Knights of Columbus. He was preceded in death by his beloved wife, Paula; mother, Cecilia Garcia; father Teofilo Landavazo and several brothers and sisters.
Maurice is survived by his five children, Cathy, Nancy, Christina, Ron (Deena) and Maurice "Mitch" Landavazo Jr.; eight grandchildren; 20 great grandchildren; two great great grandchildren and many nieces and nephews.
A Rosary will be recited on Friday, July 8, 2016 at 7:00 pm and a Mass of Resurrection will be on Saturday, July 9, 2016 at 10:00 am both at Sacred Heart Church, 309 Stover Ave. SW. Interment to follow at Mount Calvary Cemetery. To view information or leave a condolence please visit www.danielsfuneral.com
Garcia Mortuary
717 Stover Ave. SW
Albuquerque, NM 87102
505-243-5222

To order memorial trees or send flowers to the family in memory of Maurice Landavazo, please visit our flower store.