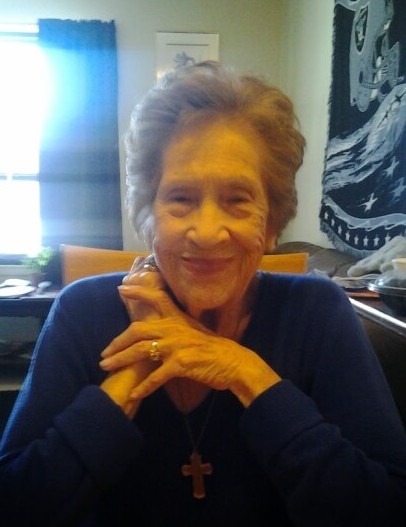 Kozlowski, Mary Frances
Age 92, passed away Tuesday, January 25, 2022. Mary was born and raised in Albuquerque, NM, she also raised her family in Albuquerque. She graduated from Albuquerque High School, class of 1943. She then married and raised her family. She worked at Quest for over 33 years. She also worked  for the City of Albuquerque. Mary enjoyed the casino playing bingo and the slots. Mary enjoyed dancing and spending time with family. She loved everyone of her grandchildren and had a special relationship with each and every one of them. She was an amazing cook. We will miss you, Until we meet again.
She was preceded in death by her parents, Evaristo and Anna Perea; brothers, Jesse Perea and Pete Perea.
Mary is survived by her children, Johnnie Kozlowski and wife, Linda, Theresa Keyes, Juliana Hollie and husband; grandchildren, Jon Erickson, Kalan, John, Christopher, Seth Kozlowski, Tara Brionez, Felicia Saiz, Terry Keyes; great grandchildren, Anamaria Brionez, Brittany Saiz, Matthew Saiz, T.J. Kozlowski, Kalan Kozlowski Jr., Alana, Megan, Gabrielle Erickson, and several other grandchildren and great grandchildren; siblings, Bridget Brink, Marcella Saiz, Teddy Perea, Michael Perea and Kathy Brothers and many nieces and nephews.

To order memorial trees or send flowers to the family in memory of Mary Kozlowski, please visit our flower store.