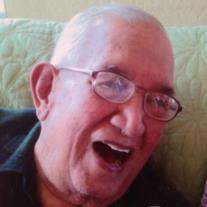 John Almaraz
John Almaraz, age 92, died on Sunday, March 22, 2015 at home in Albuquerque following long illnesses.  He is survived by his children, David (wife) Helen Almaraz; Anita A. Chavez and Barbara Almaraz; María Elena (husband )Juan Chavez of Santa Fe, NM; and John (wife) Bella D. Almaraz.  He is also mourned by his brother Felix (wife) Rachael Almaraz, sister-in-law Cecilia Campos, He is also survived by his five grandchildren Michelle Cardona, Joseph Almaraz, Joaquin Chavez, Vinnie Chavez, and Miguel Chavez, and by his many nieces, nephews and cousins.  John and his deceased wife Esther Campos were married for 62 years and made their life in the North Valley neighborhood.   He was a life-long employee of the Santa Fe Railroad.
John Almaraz was preceded in death by his parents Jose C. Almaraz and Maria Soledad Sierra, His deceased siblings are sisters Dolores Reyes, Viola Gutierrez Antonia Scala.
John was a devoted and loving son, grandson, husband, and father.  His love and generous spirit extended to his family, parents, grandparents, brother, sisters, in-laws and many ministries of the Catholic Church of Our Lady of Guadalupe Church.  He deeply loved his many nieces, nephews, godchildren and friends.
John Almaraz’s family would like to acknowledge the quality health given to John at the end of his life by thanking the staff of Hospice of the Sandías and nieces, Yolanda Reyes and Virginia Vargas.
A prayer vigil and rosary will be recited on Monday, March 30, 2015 at Our Lady of Guadalupe Church, 1860 Griegos Road, NW at 7:00 p.m.  A Funeral Mass will be celebrated on Tuesday, March 31, 2015 also at Our Lady of Guadalupe Church at 9:00 a.m.  The Rite of Committal and interment take place at the Santa Fe National Cemetery at 1:30 p.m.  Arrangements are made by Garcia Mortuary, Inc. at 717 Stover Avenue, SW, 505-243-5222.
To order memorial trees or send flowers to the family in memory of John Almaraz, please visit our flower store.

Our Lady of Guadalupe

Our Lady of Guadalupe