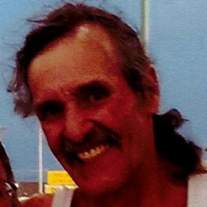 Battin, James Elton
Born on September 21, 1957 to Jim and Sue Battin lost his fight to cancer on April 19, 2016. A beloved husband, father, grandfather, brother and uncle. He will be dearly missed, not only by his family but the many friends who's lives he has so profoundly touched. Let him not be remembered by his death but instead by his magnificent life. The first to rise every morning he was the hardest worker around. His favorite quote was "Your burning daylight". Tough as nails, yet one of the kindest men you could have ever been lucky enough to know. Always the life of the party, when he was around you knew it was going to be a good time. He was always there quick to lend a hand to anyone in need. Loving, caring, compassionate, dedicated, a little crazy he was defiantly one of a kind. That was the Jimbo we all knew and loved. Words cannot describe how much he will be missed. James worked for Star Paving for over 20 years. He enjoyed fishing and gardening and belonged to Nazarene Church.

He is preceded in death by his parents, Jim and Sue Battin and one son Danny Battin.

A service will be held on Wednesday, April 27, 2016 at 1:00 p.m. at Garcia Mortuary~Chapel of Angels on the corner of 8th and Iron. Interment to follow at Sandia Memory Gardens.