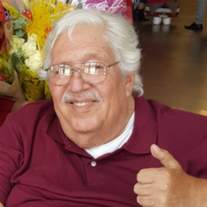 Herman Martinez Sr., a lifelong resident of Albuquerque, NM went home to be with the Lord to receive his rewards on May 25, 2017.  He was born on January 24th, 1945.  Herman Martinez Sr. played an instrumental role in New Mexico Music, he began his music career at the age of 6 playing the trumpet.  Mr. Martinez also formed Alta Vista Records(1967) and Chelly Publishing, he recorded various artist with 23 Gold Records, and 4 Grammy's.  In 2016 he was also inducted into the New Mexico Music Hall of Fame.

To order memorial trees or send flowers to the family in memory of Herman Martinez Sr., please visit our flower store.