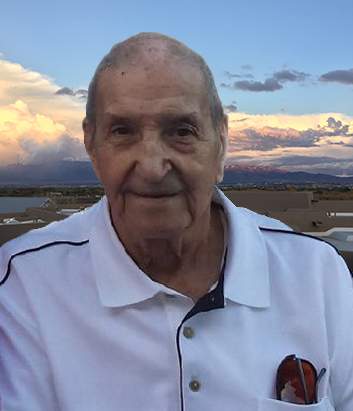 Frank Romero, Jr. was born on April 29th, 1931, in Detroit, Michigan.  At the age of two, he moved to Albuquerque, where he was adopted by his aunt Estefanita and uncle Frank Romero, Sr.  They raised him in the Barelas neighborhood of Albuquerque. He enlisted in the Army Air Corps (Air Force) and served from May 1948 through 1952.  He did his basic training in San Antonio, TX and was stationed in Merced, CA, and Fairbanks, AK. An accomplished boxer, he was named the Boxing Champion of Castle Air Force Base.  After returning from the service, he joined the Albuquerque Fire Department in 1956 and served his community as a firefighter for twenty-five years, retiring in 1981. His fellow firefighters gave him the nickname ‘Champ.’  Frank enjoyed watching sports and being with his family. Frank is survived by his wife, Louise Romero; children, Francisco, Orlando, Tomas, Sylvia, and Ricardo, their spouses, Michelle, Brenda, Steve, and Kelly; grandchildren, Orlando Jr., Jacquiline, Mariah, Sarah, Leah, Celeste, Felicia, and Gabriela; great-grandchildren, Alexia and Susana; sister, Virginia Saiz and half-brother Rudy Gutiérrez.  The family would like to express their gratitude to extended family and friends for their loving prayers and support during this difficult time.  A Rosary will be recited on Tuesday, October 16, 2018 at 9:30 am at St. Francis Xavier Church, 820 Broadway Blvd SE, with a Mass to follow at 10:00 am. Interment to take place at Santa Fe National Cemetery at 2:15 pm. To view information or leave condolences, please visit www.danielsfuneral.com.

To order memorial trees or send flowers to the family in memory of Frank Romero Jr. "Champ", please visit our flower store.