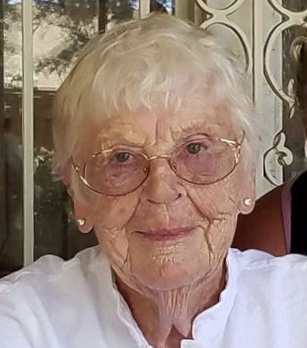 Barbara Prine passed from this earth on June 29th after 91 years of extraordinary life. She was surrounded by her family. Born in Oklahoma in 1927, Barbara and her family soon moved to New Mexico before settling in California in her early teens. After graduating from high school, she began what would be a life-long career in banking interrupted only in 1950 when Barbara joined the Air Force. Her first and only assignment was Tinker AFB Oklahoma where she met Keith Prine, the love of her life. She, Keith and their girls spent the next 21 years traveling the world: Montana, Illinois, Colorado, England, Germany, Italy, Oregon and Canada - before settling in New Mexico. Keith passed away in 1973. Barbara worked for the First National Bank in Albuquerque for more than 20 years before retiring as an Assistant Vice President in 1992. She then joined her younger daughter at Air Force bases in Nebraska, Texas and Florida before returning once again to New Mexico. Barbara was an outgoing woman who could learn anyone’s life story after 15 minutes of conversation. She was loving, invariably kind and polite and the center of her family. She was a strong red-headed Irish woman interested in everyone and everything. Her favorite word was "whatever" and she did the New York Times crossword and Cryptoquip every day - in pen. Her house was nicknamed "The Club House" and that was where everyone gathered to hear her rich and varied stories of life, love and banking. Her garden was perfect. She is survived by daughter Kelli Prine and son-in-law Christopher Nater; daughter Kris Prine; grandchildren Danielle Rincon, Keith Patterson and Meghan Patterson; great grandchildren Ryker and River Rincon; and two very spoiled cats Caesar and Minou. Thank you to DJ, Widna, Erica from Right At Home and the care team at Hospice de la Luz for their loving assistance in her final days. Barbara will be missed by all who were lucky enough to know her. She requested no memorial service. In lieu of flowers, you may donate to the Humane Society or Veteran’s Administration in Barbara’s name.

To view information or leave a condolence please visit www.garciamortuary.com

To order memorial trees or send flowers to the family in memory of Ella Prine, please visit our flower store.