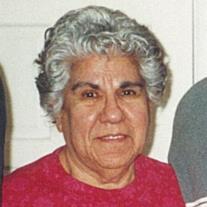 Anaya, Anita (Romero)
Age 87, passed away on December 24, 2014. She was born to the late Manuel and Ignacita (Ulibarri) Romero on October 29, 1927. She attended high school in Santa Rosa, NM. She married Larry E. Anaya and they moved to Albuquerque right after their first son was born. Anita was so proud of her six sons and loved them dearly. She was the best mother-in-law. Her grandchildren and great grandchildren were a source of great joy to her. Anita was a devoted homemaker and was known for her wonderful cooking of everything New Mexican. Her family spent a priceless year caring for her with love and listening to her amazing stories. She will be missed so much. Anita was preceded in death by Dad, her husband of 67 years on February 9, 2014; her grandson, Dennis Martin Anaya; her sisters Carmen Hoolihan, Herlinda Valverde and brother Eddie Romero. Anita is survived by her beloved sons, Larry Anaya Jr. (Mary Louise), Andrew Anaya, Robert Anaya (Darlene), David Anaya (Gretchen), Joseph Anaya (Liz), and Charles Anaya (Donna). Her special grandchildren, Carolyn Anaya, Dana Anaya, Andrea Anaya, Manny Anaya (Cindy), Liz Anaya, Torey Carmignani (David) and Aaron Anaya (Priscilla), and her beloved great grandchildren. She is also survived by her sister, Barbara Padilla (Larry); brothers, Gilbert Romero (Agnes) and Richard Romero (Nina). Visitation will be held from 8:30 am with a Rosary to be recited at Holy Rosary Catholic Church, 5415 Fortuna Rd. NW on January 2, 2015 at 10:00 a.m. with a Funeral Mass to follow at 11:00 a.m. Interment to be held at Gate of Heaven following the mass. To view information or leave a condolence please visit www.danielsfuneral.com
Garcia Mortuary
717 Stover Ave. SW
Albuquerque, NM 87102
505-243-5222
To order memorial trees or send flowers to the family in memory of Anita Anaya, please visit our flower store.